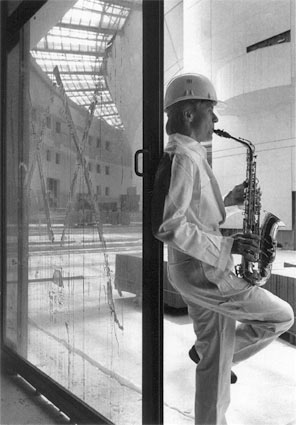 Soloist, researcher and pedagogue, Claude Delangle, one of the greatest contemporary saxophonists, stands out as the master of the French saxophone. Privileged interpreter for classic works, he enriches the repertoire and encourages creation by collaborating with the most renowned composers, including L. Berio, P. Boulez, Toru Takemitsu, A. Piazzolla, and promoting the youngest. Since 1986, he is invited saxophonist in the Ensemble Intercontemporain, he also appears as soloist with the most prestigious orchestras (London BBC, Radio France, Radio of Finland, WDR Köln, Berlin Philharmonic, Kioi Tokyo) and works with D. Robertson, P. Eötvös, K. Nagano, E.P. Salonen, Miung Wung Chung, G. Bernstein and many other conductors.

He is also invited to important festivals such as the Zagreb Bienniale , Présences of Radio France or the Musica Nova Festival . The Festival Musica of Strasbourg invited him recently to offer the world premiere of the programme “ Tango Futur ”, interpreted afterwards at the Festival Aix en Musique and at the Theatre of the Palais Royal in Paris.

Passionate for his instrument, he goes beyond the work of the soloist and frequents the Musical Acoustic Laboratories of the University of Paris 7. The results of his research on specific acoustics of the saxophone will be for him a precious asset in his collaboration with composers.

His recordings for BIS, Deutsche Grammophon, Harmonia Mundi, Erato and Verany bring out French music while revealing new musical horizons from the repertoire created by the brilliant Adolphe Sax to the avant-garde works or the popular repertoire.

After obtaining several outstanding Premiers Prix at the Conservatoire National Supérieur de Musique of Paris , Claude Delangle was appointed professor in 1988, where he has created the most prestigious saxophone class in the world. 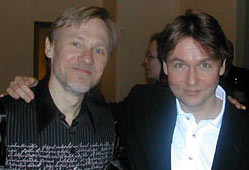 Pupils of all nationalities long to receive this education, which combines concerts with the possibility of studying with important composers and offers a large range of interdisciplinary activities. In Europe, North America, South America, Australia and Asia, Claude Delangle is requested for interpretation courses.

He is currently in charge of a collection at the Henri-Lemoine-Paris publications, where he works for the publishing of new repertoires and for the republishing of classic works, not forgetting, however, the publication of pedagogical works.
During this season 2003-2004 Asia will welcome Claude Delangle four times: in Japan he will perform in a tour with the Metropolitan Tokyo Symphony, in Hong Kong with the City Chamber Orchestra, in Singapore he will record for BIS the great concertos of the repertoire with the Symphonic Orchestra of Singapore and will give recitals in China. He is also planning the premiere of Trame 1 by Martin Matalon at the Arsenal in Metz, a tour of recitals in Central America in July and concerts with the orchestras of Saint Petersburg and Novossibirsk in September. The strong point of his Parisian season will be the Festival Agora in June, for which he has been given carte blanche by the IRCAM (Institute of musical acoustics research and coordination).